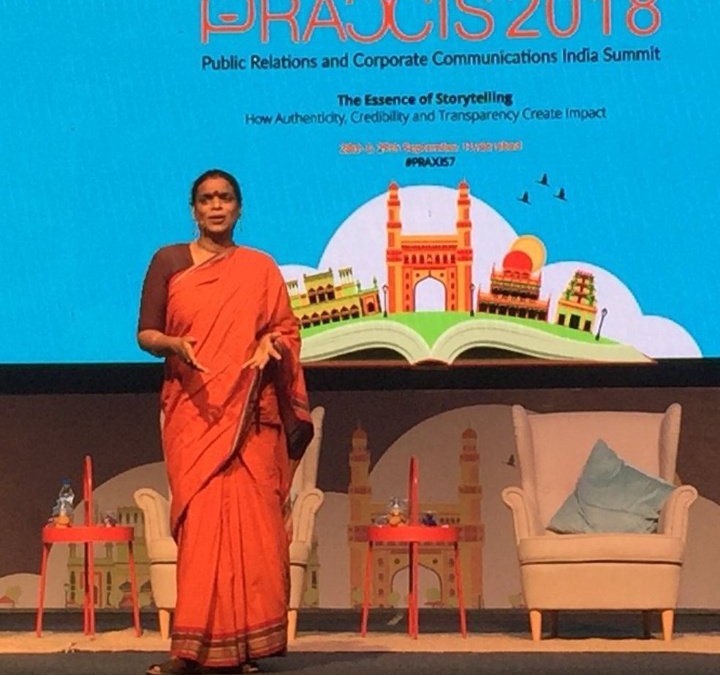 The world’s largest conference of communication professionals, #PRAXIS7 was held at Hyderabad. I am so grateful that I got the opportunity to attend the conference and a chance to hear an amazing session by Gauri Sawant. She is a transgender activist from Mumbai.

She is the Director at Sakshi Char Chowghi – a home that helps transgender people and people with HIV/AIDS. She narrated her journey from being seen as an outcast in the society to having her own identity. Being a transgender no one accepts you, not even your own family. She left her house and came to Mumbai. But starting life in the new city was not easy where she had to fight for her living, face the criticism, rejection and ridiculous comments by the society. But her life changed after a Vicks advertisement featuring her and her daughter became viral. People started noticing her as Gayatri’s mother started showing a friendly gesture but at the same time there were people who raised a question saying, how can a transgender become a mother? To that, she said motherhood is a behaviour. One doesn’t need to give birth to become a mother, if you show love and care, you are a mother. This is a huge step taken by the government but for it to be effective people need to accept it not just by showing support on social media but by genuinely accepting them as that is what will make a difference. She addressed the crowd asking them to give job opportunities to people from the transgender community, to treat them equally and to accept them for who they are.

My learning from this session is to never stop fighting, it might take months or even  years to reach the goal but in the end all the struggle will be worth it.

Sushabya is a part of Class of 2019 in the Post Graduate Programme in PR & Corporate Communications at School of Communications & Reputation, Mumbai. She holds a degree in B.A with specialisation in Journalism and Psychology from M S Ramaiah College of Arts, Science & Commerce, Bangalore. Her love for meeting new people and desire for learning drove her towards the field of Public Relations.