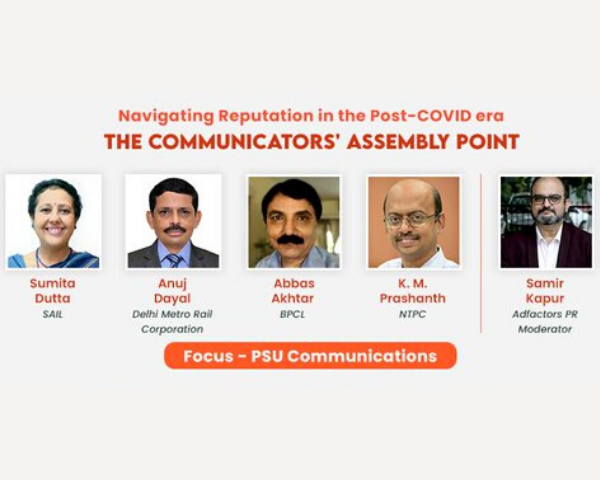 The world is currently suffering from a Coronavirus pandemic. COVID- 19 has severely affected the world’s economy as activities and movements have come to a halt. This has created curiosity about what the new normal will look like. Acknowledging this scenario, Reputation Today Magazine, and Adfactors PR organised The Communicators’ Assembly Point which covers a series of webinars.

On how the Public Sector Undertakings are gearing up for the new normal, Sumita Dutta cited challenges manifest as opportunities. Hence, this pandemic has introduced new possibilities. For SAIL, the biggest shift was about going virtual. They recalibrated themselves and shifted to E-marketing. Anuj Dayal mentioned all the activities at Delhi Metro are at standstill but they run their system live as a preparedness activity. K.M Prashant went on to state that even during the lockdown NTPC employees are working 24X7. Abbas Akhtar opined that due to the panic there was a 24% growth for LPG demand. As a result of which the team had to mobilize delivery along with ensuring safety. BPC implemented shelter arrangements and victuals for the truck drivers.

On what changes are being witnessed during these transitions, Sumita Dutta discussed one of the changes she observed was that the steel fraternity is very adaptable. Internal and external communication has switched to virtual. Reskilling and employee safety has become crucial. They have been producing video content, masks, and sanitisers.

On how NTPC is driving the conversation around environment societal impact, K.M Prashant specified NTPC’s growth plan by 2032, 30% of the generation capacity will be covered by renewable sources. According to him the three factors for the future are:

On how much role communication has played in making what metro is today, Anuj Dayal responded that the entire brand has been built without any advertisement. Since the project was implemented in a metro city communications represented a major role. He said, “In an urban city, we are always in a war zone.” He further went on to mention that the society is no more interested in soft news.

Regarding cultural dynamics and what role internal communications plays in perceiving the perception of being competent in the case of BPC, Abbas Akhtar talked about how the lockdown caused a high demand among the channel partners and dealers. To communicate they created an internal standard operating procedure to ensure that the company is fighting with them. Stories of COVID warriors were shared through their in-house radio channels which have helped and motivated numerous people. The fuel stations were welcoming everyone where they provided free aliments and shelter. Abbas Akhtar opined this is the time to be humble and acknowledge a sense of social service.

On how the healthy relationship between PSU and journalists will change post-COVID, Sumita Dutta addressed that they had to reinforce their reputation as a sensitive and socially responsible brand, and reaching out to media recently has been challenging. Pushing positive stories has to be a communication strategy. She further spoke about how good deeds make good stories and they have been ensuring that. Anuj Dayal shared that print media is the mother media. According to him, the print had a lot of value until COVID. He answered newspapers with high circulations always had an impact compared to television news but now digital is the future. K.M Prashant views on the same were:

An interesting insight K.M Prashant shared was during a crisis some brands go into hibernation which denotes inefficiency. NTPC has been publishing positive stories. This helps in reassuring stakeholders. A crisis is the time to establish relationships with journalists.

Integrated steel plants have their own townships, on what communication strategy each township adapted to meet the communication challenge, Sumita Dutta discussed during this tough time they had to motivate the employees to operate and help them overcome the fear of getting infected. To encourage them they created films on SAIL’s Corona warriors. To share these films, they produced a small news capsule termed as “SAIL track” that kept the employees on track about what’s happening in the company.

On how communications can deliver in times of crisis with respect to stakeholders, Abbas Akhtar mentioned that a standard operating procedure is essential during an emergency. Always be transparent to the stakeholders and the public. Reaching out to society during a crisis and continuous communication with the public at large is necessary. As a result, in case of a disaster, there will always be support as this is where the perception matters.

On how Delhi metro will ensure social distancing post-COVID, Anuj Dayal stated physical markers will be attached on alternate seats although it has to be self-regulation as well. Metro staff will scan everyone at the platform. He quoted, “We will do our bit but at the same time, the public has to cooperate.”

On what kind of strategies can be used to manage misinformation and fake news, Abbas Akhtar mentioned BPC closely monitors conversations on social media platforms, and if any complaint arises, it is immediately acknowledged and is resolved within 48 hours.

On what measures DMRC is taking to create a token booth and card punching safer as that can lead to becoming a hub for COVID, Anuj Dayal shared that they are proposing for cashless transactions and smart cards. When asked about how top leadership is communicating with stakeholders, K.M Prashant stated it is crucial for leaders to communicate as it carries reassurance. At NTPC whenever the top leadership team visits the projects they mandatorily speak to the employees, the trade unions, and the young engineers.

K.M Prashant’s closing remark was a quote about the crisis from Winston Churchill that said, “Never let a crisis go to waste.” He said this crisis should be utilised as an opportunity. Abbas Akhtar concluded the discussion by saying, “The paradigm shift is that we should be quick in responding. Also, positive storytelling is the new mantra.” It is about how you are adding value to society.

Interesting Read: Futuregazing: What will the new normal look like? 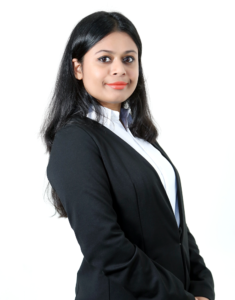 Anjana Kallat is a part of the Class of 2020 of PG Programme in PR and Corporate Communications at SCoRe, Mumbai. She completed her winter internship with GolinOpinion, Mumbai. She was born in Kerala but brought up in Mumbai.

She has completed her bachelor’s in Psychology and Sociology from St. Andrew’s College in Bandra. Her mother tongue is Malayalam but since she has grown up in a boisterous city, she is comfortable with English, Hindi, Marathi. She is fascinated by languages, due to which she is even learning sign language. She looks at the positive aspects even in unfortunate situations and is always keen on learning new things. She is a calm and collected person, and she believes to be well organised. 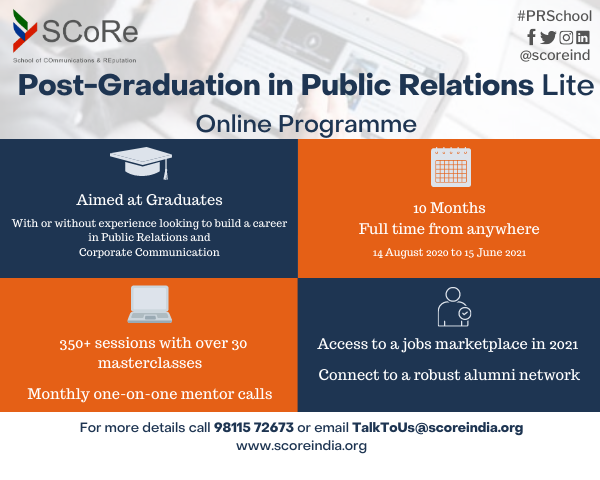 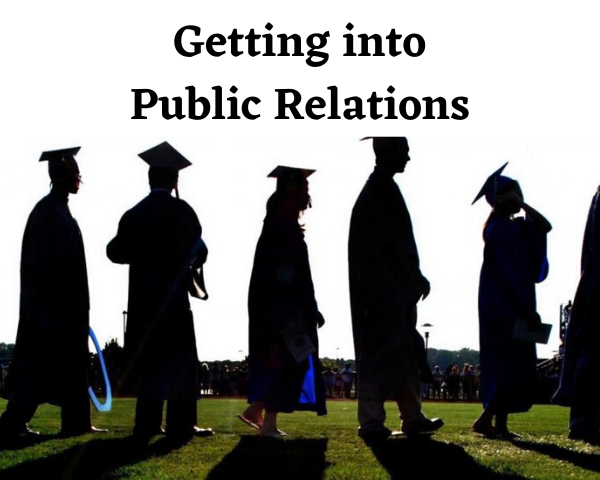 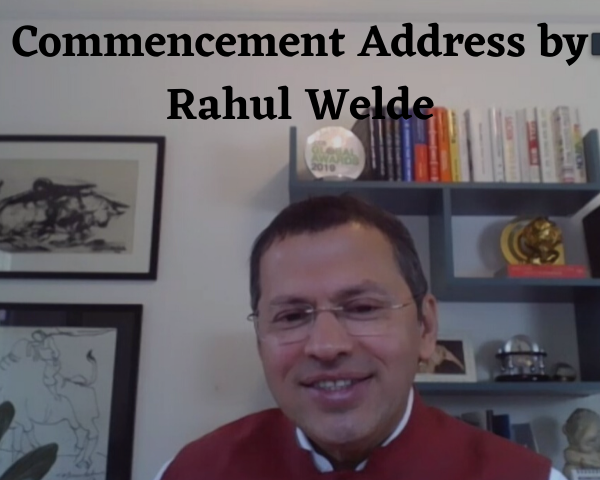