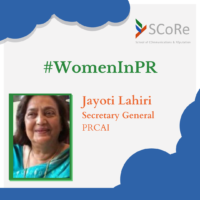 Whenever we talk about women, the first thing that strikes our mind is feminism. However, even though lots of people support this idea, there are hardly any representation of it. Today, women do have opportunities to display their professional efficiency to the world but still it is evident that gender discrimination is very much alive and it needs a lot of work to get rid of it. 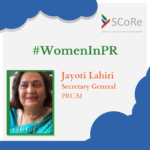 There are so many women leaders worth writing about who brought a huge change in so many industries and one of them being in PR. However, one of such recognised personalities who I want to mention is Ms. Jayoti Lahiri, who according to me is one of those brave women to come forward and prove the capabilities of a woman in the outside world.

Jayoti Lahiri is the Secretary General of PRCAI (Public Relations Consultants Association of India). She is a veteran from the Indian Communications and Public Relations fraternity who had turned 80 in the year 2019. According to Reputation Today’s article on Top 10 Women in PR, she’s a Secretary General who is not only passionate about her work, but also had successfully brought the PR consultancies of India under one umbrella. She’s a graduate from Calcutta University with Geography honors and had spent 18 years working for Xerox India and then joined the PRCAI in the year 2005.

Sharif D Rangnekar, a communications consultant, former journalist and human rights activist who is also the ex-CEO and ex-chairman of Integral PR, when asked about Jayoti had said, “When I first met Jayoti I was a chapter head, I knew very little about her other than her secretarial role at the PRCAI. What I saw in her then was absolute honesty and someone extremely careful about finances, knowing that every penny spent had to be earned back – a tough task given the size of the association and the business then”.

Nitin Mantri, Co-founder and Group CEO of Avian WE said, “I first met Jayoti in 2009-10 I think, and I was struck by her vivacity, humour and warmth”.

Personalities like Prema Sagar, CEO and Founder of Genesis BCW and Valerio Pinto, Chief Executive Officer at Weber Shandwick, India, also recalls meeting with her and giving positive responses when asked about her.

This is evidence to not only her success in this profession but also the way she has touched people’s hearts. On the occasion of Women’s Day, I think she is an inspiration for all women to follow. 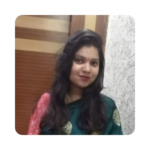 Aneesha is a student of School Of COmmunications and REputations (SCoRe) – Class of 2022 – Spring Batch. She has done English literature. She is Born and brought up in Kolkata but currently based in Mumbai. She is a single child and she strongly believes in changing one life if not the whole world. She can be reached on Twitter as @AneeshaGhosh2 and on LinkedIn as Aneesha Ghosh

6 Simple Tips to Develop a Reading Habit in 2023

The Role of Public Relations in Marketing